Today is a sad day. My friend Mark had to say goodbye to his dog Keno. Keno was a 7-year-old German Shepherd . I actually purchased her as a birthday present for him when she was 2 years old. She was a rescue dog and we knew she was unique when we met her. She bonded with Mark immediately and he with her.

Keno had a personality of her own. She was not a social dog that you could take everywhere but once she got to know you she was a very loyal pal. She obeyed commands and was comfortable walking on leash as well as playing catch with a ball. 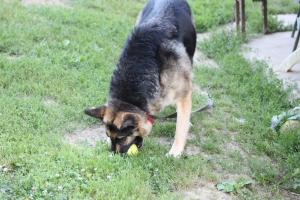 During the summer her favorite spot was hanging by Mark’s swimming pool. She did not go in the water but lying on or under the deck were her  favorite spots. She also enjoyed barking at the turkey and deer from there as well.

Unfortunately she developed hip dysplasia symptoms which made  running in the yard difficult for her. She still played in the house and walked in the yard. I dog sat a number of times and always enjoyed spending time with her. When I visited there was always a tail wag and dance for me.

Keno was doing well until yesterday. She became ill and her appetite was poor. Today she had difficulty walking and was weak. Mark took her to the vet and made the toughest but best decision.

I feel badly for Mark and his daughter Shannon as they lost their best buddy. Keno was a special dog. I always thought of her as my dog too. I will miss her. Farewell my friend.

This entry was posted in Uncategorized. Bookmark the permalink.

theparkerfive.wordpress.com/
The Diary of an Alzheimer's Caregiver

APPRECIATE THE GOOD, LAUGH AT THE CRAZY AND DEAL WITH THE REST!

the good, the bad and the brilliant

The Family Side of Fire Life